Bob Boilen | January 27, 2021
There's an elegant vibe as Lous and The Yakuza perform a Tiny Desk from the Book Bar in the Hôtel Grand Amour in Paris. And while the music is smooth, upbeat and warm, what lies beneath in Lous backstory, in her French lyrics, is, at times, deep and disturbing.

Lous — an anagram for "soul" — is Marie-Pierra Kakoma, a 24-year-old artist based in Belgium but born in the Democratic Republic of the Congo. She came to Belgium because her family escaped war in the Congo. They were refugees. For her Tiny Desk (home) concert, she opens with her 2019 single, "Dilemme." The song conjures up images of growing up in the Congo and Rwanda: "Living haunts me, everything that surrounds me made me mean," she sings in French. Her songs are often set to Congolese rumba rhythms, filled with resilience, beauty and resistance.

These songs come from her 2020 album, Gore, and are steeped in a life that saw her mother imprisoned in the Congo for being Rwandan, then become separated during their escape to Belgium. They were eventually reunited, butLous was a troubled teen and spent a period of time adrift before pulling her life together in pursuit of music and art. There's much to uncover and discover here. This Tiny Desk (home) concert is a deep journey. 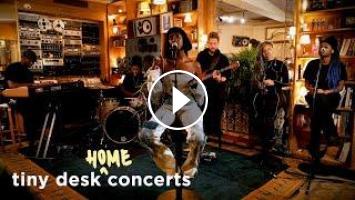