By Bobby Carter | November 30, 2020
"Tiny Desk! We finally made it!" exclaimed singer-songwriter Mac Ayres as he finished his opening number, "She Won't Stay Long." I'm sure his fans will especially feel that sentiment since they've made a home in our social media feeds and YouTube comments for years now. We were well on the way to hosting Mac Ayres at our D.C. offices until we had to shut down and pivot. As we worked our way through the adjustment to Tiny Desk (home) concerts, he also needed some time to regroup.

The 23-year-old Long Island native shot this in his basement back in September (hence the 'register to vote' comment). Mac's modus operandi lends itself to the Tiny Desk naturally. No over-produced beats, lots of live instruments and a stunning vocal range — and he handles all duties: guitar, bass, keyboard and background harmonies for three songs from previous albums and the premiere of a new song, "Sometimes." Wow. 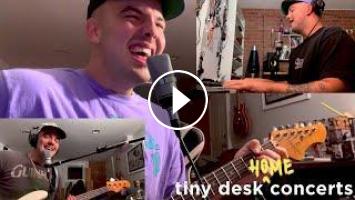