Sept. 22, 2020 | Suraya Mohamed – In 2015, Oddisee visited the Tiny Desk with a drummer and a keyboardist. For his Tiny Desk (home) concert, he assembled his full band, Good Company, for the first time since the global pandemic cancelled their tour last spring. They rehearsed the day before this capture at Assorted Studios in York, Penn., the midway point between the members' hometowns of Philadelphia, New York City and Washington D.C. They picked this facility because it felt more like a living room than a studio. And to make it feel as cozy as possible, they brought memorabilia from their own homes. Bass player Dennis Turner brought family photos, Ralph Real (on the Fender Rhodes) brought his son's toy drum set, and Oddisee brought tribal statues from Sudan.

The five captivating songs are from his new EP, Odd Cure, "a record I didn't want to write but needed to," Oddisee said in July. He wrote it in eight weeks, between March and May, while in self-isolation. He had just returned from a performance in Thailand and wanted to protect his family. Oddisee says these songs were inspired by the deluge of news, social media, misinformation and conspiracy theories generated during the first weeks of the pandemic. Relevant and inspiring, his music and its message addresses the uncertainty and anxiety we all live with today.

The Tiny Desk is working from home for the foreseeable future. Introducing NPR Music's Tiny Desk (home) concerts, bringing you performances from across the country and the world. It's the same spirit — stripped-down sets, an intimate setting — just a different space. 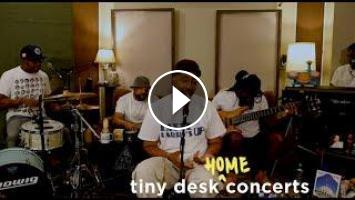