"We weren't sure what to wear and the only thing we could agree on was devil costumes." In a pink wig, blue horns and a purple cheerleading outfit, Sadie Dupuis brings a brightly ghoulish spirit to her Tiny Desk (home) concert, just in time for Halloween.


Haunted Painting, her terrific new album as Sad13, is, in part, about metaphorical and literal ghosts: their weight and place in your life, but blasted with the sonic glee of a neon rainbow. While Dupuis' guitar unmistakably squiggles with a vocal vibrato to match, Sad13's pop sensibility differentiates from her other band, Speedy Ortiz; these sweet-and-sour songs explode with creative arrangements and nerdy production techniques.


Recording separately from their homes in Philly, New York and Stamford, Conn., Sad13 (featuring drummer Zoë Brecher and bassist Audrey Zee Whitesides) doesn't so much slim down the wild details but finds different textures in these songs. "Hysterical," in particular, leans into a fuzzy space-age boogie, as Dupuis hooks up her Farfisa organ to an array of effects pedals, sounding like one of Joe Meek's idiosyncratic productions from the 1960s.


Sad13's set ends with "Take Care," a song that beautifully blossoms from grief. "It's about caring for and missing people to an extent that's detrimental to your own well-being," she shares as cellist Sasha Ono and violinist Camellia Hartman take their virtual places. "I think, as we're all secluded and cloistered away from the people we care about, this one's been resonating harder with me than it did when I recorded it." 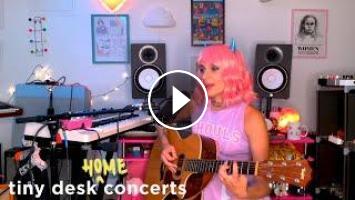