AVA
Sept. 29, 2020 | Bob Boilen -- The Tiny Desk is working from home for the foreseeable future. Introducing NPR Music's Tiny Desk (home) concerts, bringing you performances from across the country and the world. It's the same spirit — stripped-down sets, an intimate setting — just a different space.

This is the tiniest of Tiny Desk (home) concerts, a single song, recorded in Rwanda by The Good Ones. In 2019, the band's album RWANDA, you should be loved was one of my top 10 albums. They were to play a Tiny Desk concert in May of this year, but the world had other plans.

Adrien Kazigira and Janvier Havugimana know endless hardships. The night before this recording was made, a flood in Rwanda killed more than a dozen people and destroyed homes. Muddied water was more than waist high in Janvier's one-room hut. That next morning, Grammy-winning producer Ian Brennan and photographer Marilena Umuhoza Delli showed up to record the duo; she had the camera and he handled the audio. And though Janvier had been up all night dealing with the mud, they all took a two-hour drive to Adrien's hilltop farm. Janvier tapped out the rhythm with a key on a thermos; the jug was filled with milk — milk from a cow Adrien was able to purchase courtesy of a 2019 U.S. tour.

The performance is a song they'd just learned to play together: "Soccer (Summer 1988)." It's a nostalgic tune of a favorite soccer team, Rayon Sports F.C., from the days before the genocide in Rwanda took too many lives nearly a quarter of a century ago. Support means a great deal to these people, and if you like what you hear, their Bandcamp page is a good way to help The Good Ones. 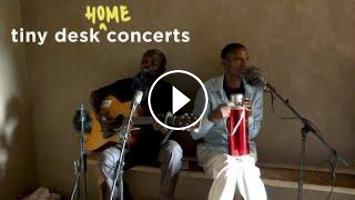