June 26, 2020 | Abby O'Neill -- The Jamaica-born, Miami-raised reggae artist BEAM is no stranger to the limelight. His father, Papa San, was a dancehall superstar during the late 1980s and early '90s before becoming a preacher. That combo meant BEAM developed musically and spiritually from an early age. Proudly reppin' a Broward County hoodie, the 23-year-old singer and his co-producer and keyboardist, Al Cres, brought a new flair to the Tiny Desk (home) concert series with some unorthodox visual effects. BEAM's light-hearted gravitas and charisma shine through from start to finish. "MAD GAAL," featured on his 2019 major-label debut, 95, is sure to keep living room dancefloors bumping during the pandemic. He concluded the set with an exclusive: "KUMBAYA", a fitting song for this moment in history. 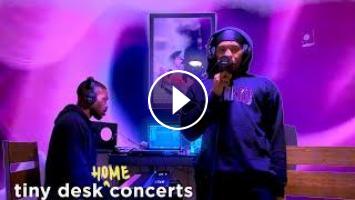