Live at the Northcote Theatre, Melbourne. This party out of bounds from Australia’s internationally renowned electro-pop maestros is the latest welcome addition to Moshcam’s World Stage project. Not for nothing did they win Live Pop Act of The Year at the 2018 National Live Music Awards. Following the release of their most recent album ‘TILT’ in April this year (and a performance at Glastonbury no less), we’ve been hanging out to capture these guys in full flight - and here they are in this fabulous new Melbourne venue! Mojo described their new album as the feel-good hit album of 2022 (and don’t we all need that right now!) whilst Clash Music (giving the album a 9/10 rating) summed it up beautifully: “unapologetic bangers with tongue planted firmly in cheek and furious, feminist bent, TILT is the album you need in your life.” If you don’t know them already, you most certainly soon will. 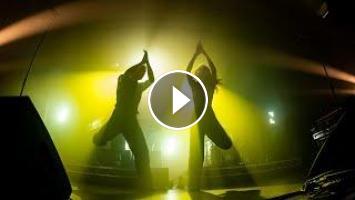 DOWNLOAD THE MOSHCAM APP TO WATCH THE FULL MOSHCAM ARCHIVE Live at the Northcote Theatre, Melbourne. This party out of bounds from Australia’s interna...