admin
May 20, 2019 | Tom Huizenga -- I've watched a lot of Tiny Desk concerts over the years. It's good to see musicians in the raw, away from stage lighting and backing tracks — as if they've just stopped by an office to play over a lunch break, with desk-bound employees watching on. The performances should expose flaws, but instead they tend to expose musicians being casually brilliant, like the members of Ensemble Signal, who certainly play these pieces beautifully.
Unfortunately, I was nowhere near Washington, D.C. for this recording. And I still find it bizarre that you can put a musical idea on paper and have it reproduced at such a distance — and with such added life. We're used to sounds and images being shared as exact clones of one another, but the pleasure in using ink and paper is that the music is interpreted rather than just reproduced. All those years of practice, in all those players, distilled into 15 minutes of music. It's a big privilege — and a continuing motivation to write the best I can.
The first piece, Three Miniatures from Water, was originally a sketch for an Australian Chamber Orchestra commission in 2014. I thought it'd be easier to approach writing for full orchestra by starting with a piano miniature and scaling it up. In fact, only some of the material made it to the final commission, and I always felt the original three miniatures hung together well enough as its own piece of music.
I'm a big admirer of composer Olivier Messiaen, and one of the musical scales he favored was the octatonic mode. It's a lot like an Indian rag in that it's a rigid set of notes, yet isn't necessarily in a major or minor key. There are hundreds of rags in Indian music, but I was surprised to find that Messiaen's octatonic scale isn't one of them. Despite this, it sits nicely over a drone — and that was the starting point for this music. That and the glorious sound of the tanpura, the drone instrument that underpins everything in classical Indian music.
The piece is called Water, after the Philip Larkin poem with the same title, and was especially inspired by the final stanza:
And I should raise in the east
A glass of water
Where any-angled light
Would congregate endlessly.
The second piece, called 88 (No. 1), is also in one of Messiaen's modes in the first half, before becoming a celebration of the mechanical nature of the piano. The performer has to put fingerless gloves on halfway through, partly in tribute to the immortal Glenn Gould, and partly because the technique requires some painful hammering. But don't let that fool you into thinking the music is dark or angry: It is — or is meant to be — joyful.
SET LIST
Three Miniatures from Water
88 (No. 1)
MUSICIANS
Ensemble Signal:
Lisa Moore: piano; Olivia De Prato: violin; Lauren Radnofsky: cello; Greg Chudzik: bass; Paul Coleman and Elena Moon Park: tanpura
CREDITS
Producers: Tom Huizenga, Morgan Noelle Smith; Creative Director: Bob Boilen; Audio Engineer: Josh Rogosin; Mixed by Jonny Greenwood; Videographers: Morgan Noelle Smith, Bronson Arcuri, Kaylee Domzalski, Kimani Oletu; Associate Producer: Bobby Carter; Photo: Amr Alfiky/NPR 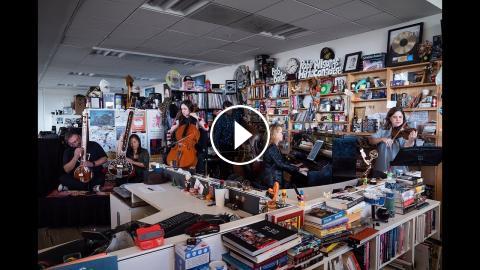