Sept. 3, 2019 | Bob Boilen -- The last time we filmed these three Israeli sisters, they were sitting in my hotel room during South by Southwest, performing a heartbreaking lullaby, accompanied by just a guitarist. Now Liron, Tagel and Tair Haim are behind my desk with a full band of keyboards, bass, guitar and drums, singing more forlorn tunes in their unique three-part harmony.

Their songs mix Yemenite and Arabic traditions with splashes of reggae and hip-hop. Our Tiny Desk concert begins with "Habib Galbi" ("Love of My Heart"), a heartbreaking song that went viral for A-WA in 2016. A-WA have recently released a second album, Bayti Fi Rasi (My Home is in My Head). The record tells the story of their grandmother traveling from Yemen to Israel.

The final two songs come from that recent album. "Al Asad" is a metaphorical tale of facing down a lion in your path, while the last song "Hana Mash Hu Al Yaman," ("Here is Not Yemen"), paints the struggles of coming to a new land, learning the language, finding work, a place to live and making it a home. This music is relatively upbeat with dark, thoughtful words. We've subtitled English translations as part of the video to help their message reach an even wider audience. This music is for our world at large. 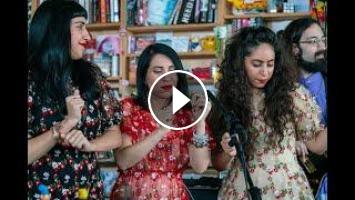