admin
March 18, 2019 | Sidney Madden -- In astrology, your Saturn return is the time in life when Saturn goes back to the same spot it was at the time of your birth. As Nao explained during her appearance at NPR's Tiny Desk, "It's about leaving adolescence and going into adulthood." This crossing of the threshold that happens around your late 20s to early 30s is the inspiration for Saturn, Nao's sophomore effort and one of 2018's best albums. When the U.K. singer-songwriter brought her band and cosmic energy to the Tiny Desk — sneaking in her 2015 breakthrough track, "Bad Blood," alongside Saturn standouts — the strength and conviction of her performance had fans in the office strapped in for the emotional ride.
While Nao usually performs with synthy, electronic twinkles, her day at the Tiny Desk was stripped down by comparison. At times, her lyrics ring out with just a sparse guitar to carry them. Like a roller coaster of unexpected upheaval, Nao's distinctive vocal range on this four-song set goes from bellowing and husky to soft and coy, often within the same verse. Be it the breezy, Brazilian funk of "If You Ever," the hallowed harmony of "Orbit" (complete with prayer hands) or the valiant soul-searching of "Make It Out Alive," it's almost as if Nao duets with herself, answering her own questions, settling into her own quirks.
Saturn return can be marked with new responsibilities, confusion and poison-thorned serendipity. But by creating astral, intentional music through her growing pains, Nao ended up grounding herself.
Set List
"If You Ever"
"Bad Blood"
"Orbit"
"Make It Out Alive"
Musicians
Nao: lead vocal; Ariel O'Neal: guitar; Joe Price: keys; Henry Guy: bass; Samson Jatto: drums; Troi Lauren: vocals; Taylor Samuels: vocals
Credits
Producers: Sidney Madden, Morgan Noelle Smith; Creative Director: Bob Boilen; Audio Engineer: Suraya Mohamed, Patrick Boyd, Josh Rogosin; Videographers: Morgan Noelle Smith, Kimani Oletu, Beck Harlan; Associate Producer: Bobby Carter; Production Assistant: Adelaide Sandstrom; Photo: Amr Alfiky/NPR 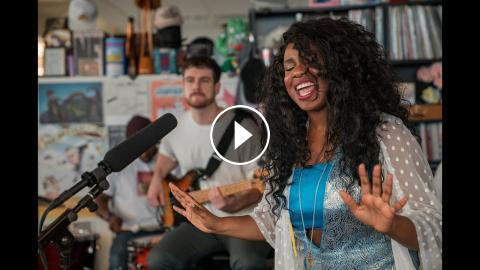 March 18, 2019 | Sidney Madden -- In astrology, your Saturn return is the time in life when Saturn goes back to the same spot it was at the time of yo...