admin
Parma native Ferdinando Paer, who wrote more than 50 operas, composed Agnese in 1809 for a private entertainment and a company of amateur singers. In 1824, with a few changes to the score, this opera semiseria in two acts reached the Theathre- Italien in Paris where it gained international success; among its early admirers were Berlioz, Chopin and Victor Hugo who mentioned it in his Les Misérables but a few decades after its première it fell into oblivion. In modern times it was first revived in concert form by Conductor Diego Fasolis and finally, in 2019 with the addition of a critical revision, it was performed at the Teatro Regio di Torino.
The plot presents several fairy-tale elements, which are very well realized through the stage setting.
When Agnese elopes with her beloved Ernesto, her father Uberto loses his mind and believes her dead. He is therefore hospitalized into a mental institution, where most of the action takes place. In the Ospedale dei pazzi sympathetic doctors, security guards and administrators try to help Uberto regain his sanity, to no avail. In the meanwhile Agnese, betrayed and abandoned by Ernesto, goes back to her father to ask for forgiveness, unaware of his troubles. Ernesto is repentant of his philandering ways and follows Agnese to win her back. The opera ends with Uberto regaining his mental clarity when he hears Agnese sing an old song, and a general reconciliation occurs.
In director Leo Muscato’s words “the most interesting aspect of this opera…is the irony that is present from the beginning to the end of the story” which imbues even the most dramatic circumstances.
The set design for this wonderful, world premiere on video opera, is made of a series of movable boxes which are similar to carillons and which open-up displaying different environments.
“The orchestra was the best player on the field, every solo perfectly on point, and their performance was extremely enjoyable.” - Bachtrack

FERDINANDO PAER (1771 – 1839)
AGNESE
Dramma semiserio in due atti
Libretto by
Luigi Buonavoglia
from the comedy Agnese di Fizendry by Filippo Casari, drawn from the novel The Father and Daughter by Amelia Opie.
Critical Edition by Giuliano Castellani 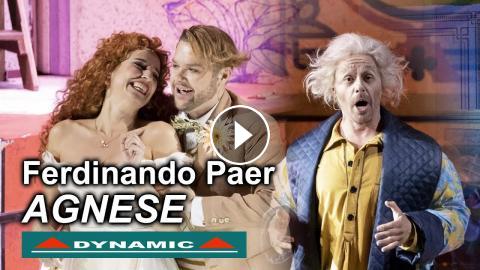 Parma native Ferdinando Paer, who wrote more than 50 operas, composed Agnese in 1809 for a private entertainment and a company of amateur singers. In ...