Before starting work on "Nabucodonosor", which was later to become his iconic "Nabucco", Giuseppe Verdi was on the verge of abandoning music, discouraged by the flop of his second opera. He then received a libretto by Temistocle Solera almost by chance, as it was destined for another composer. Verdi was very reluctant to start work on the text, but later he recalled that one night he “threw the manuscript on the table […] the booklet opened. Unwillingly, my eyes were drawn to the page that was before them and onto these verses: Va, pensiero, sull’ali dorate.” So he started focusing on the task and “one day one verse, the next day another verse, a note and a phrase at a time, […] little by little the opera was composed.”

The rest is history. "Nabucodonosor" was a triumph, the public at La Scala on the night of 9 March 1842 repaying him with an unprecedented response; they hailed all the numbers of the opera with warm ovations and paid special tribute to the chorus "Va, pensiero, sull’ali dorate", which in Italy has since become a sort of second national anthem. The reason for it being so great a success was that
the opera possessed such force in itself, such simplicity and evenness of style that made it the perfect example of tragic opera.

This production, filmed at the 2019 Festival Verdi in Parma, is a very powerful and engaging creative project by 2018 Abbiati Prize winner duo Ricci/Forte. The most striking feature of the staging is that the action takes place in 2046 on a military ship, which reminds us of an Ark. The production portrays a dystopian society where we can find many references to real contemporary events:
Nabucco is turned into an oppressive dictator who is obsessed with his own image; the Hebrew slaves are portayed as refugees wearing life vests; while on the ship's deck various screens are used to display the regime’s propaganda. 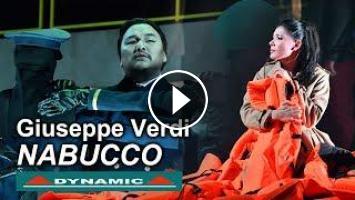 DISCOVER: https://naxos.lnk.to/DYN37867ID Before starting work on "Nabucodonosor", which was later to become his iconic "Nabucco",...