AVA
Erich Wolfgang Korngold was a child prodigy, whose early genius was recognized and admired by the likes of Gustav Mahler and Giacomo Puccini. His musical style was strongly inspired by theatre and possessed a great lyrical breath as he managed to mingle all the different influences absorbed in Vienna during his studies and develop his own voice. The advent of Nazism in 1934 forced him to seek refuge in the United States, where he became the first composer of music scores for films, winning two Oscars and marking a milestone in the Hollywood film industry.
Teatro Regio di Torino has contributed to the rediscovery of this precious opera in one act by staging its Italian premiere.
Violanta is Korngold's second opera, that the composer wrote in 1914, at the age of 17. It was premiered with great success at Munich’s Hoftheater on 28th March 1916, and a few days later in Vienna. The influence of the Austrian capital is key to understand Korngold’s style: from the late 1800s to the early 1900s Vienna was a place of contrasts where coexisted nostalgia of the past and innovative trends, immobilism and creative energy. Erich grew up in this environment, absorbing inputs of different provenance which are all present in Violanta, making this opera a sort of “small-scale Vienna”.
The music language of this opera is a stage where different styles meet and clash. Korngold's music, with very refined orchestration, perfectly paints the contrast between the dark and deadly atmosphere of the oppressive world which Simone forces upon his wife and the sudden glimpses of life, sensuality, and passion brought by Alfonso, making Violanta one of the masterpieces of the early twentieth century.
Driven by a powerful desire of revenge against the man who had seduced and led to the suicide of her sister, Violanta persuades her husband Simone to become her accomplice and kill him. But after meeting and enticing her victim – Alfonso, the illegitimate son of the King of Naples – her feelings turn into passion, and her part is overturned. So strong is her love for him now that in order to save Alfonso’s life she takes the blow meant for him and dies.
Korngold sets this opera in an imaginary and decadent fifteenth-century Venice, reflecting s the fascination for the Renaissance age and for the themes of passion and death that marked the stylistic code of the time. Pier Luigi Pizzi, who is stage director, costume and light designer of this production, choses to set the action at the beginning of the 1920s in a decadent Venice, where distant echoes of a melancholic Carnival convey an additional sense of gloom to the whole performance.
Conductor Pinchas Steinberg declared: “This music is full of colours, full of emotions, it’s incredible the scale of emotions and colours and expression that [Korngold] puts in this score. Not only for the orchestra but also for the singers and it’s a miracle that a 17 year old boy could write such a thing.”
“The lyric sound of the soprano Annemarie Kremer is well suited to the title role — and the orchestra likewise revels in the opera’s eroticism.” Seth Colter Walls – The New York Times 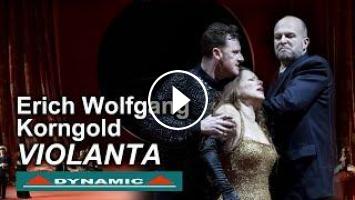 Erich Wolfgang Korngold was a child prodigy, whose early genius was recognized and admired by the likes of Gustav Mahler and Giacomo Puccini. His musi...