"Baby, I almost shook my wig off! But that's what a love song does to you," KIRBY exclaims midway through her Tiny Desk (home) concert. And you know what? She's absolutely right. The music of this Mississippi singer-songwriter carries the most weight when it embraces those slightly disorienting, in-between stages of love's journey, the moments that playfully throw you for a loop.

KIRBY's panache here, bolstered by a yellow bodysuit and blonde afro, is infectious and — just like the sunny backdrop of her manager's LA home — her vocal runs radiate a soft power. Accompanied by Tiny Desk alumni guitarist Justus West and flanked by plenty of plant life, KIRBY leans heavy into love songs off her debut album, Sis. But don't let the throwback pop and doo-wop fool you — these tracks come with a dose of millennial spunk. "New hair, new braids / Nina Simone with a touch of 'Yonce," she sings on "Kool Aid" with a confident smirk to camera.

Before ending her set, KIRBY welcomes yet another alum of the Tiny Desk, Grammy-nominated Lucky Daye, to join her on "Velvet," a song that stands out on the current season of Insecure for highlighting the beautiful mess of Issa Dee's love life. It's no coincidence that Issa's mishaps fall in line with the starry-eyed tales KIRBY spins in her songs. In both cases, there's an authenticity in admitting not everything's figured out, but living it up anyway. 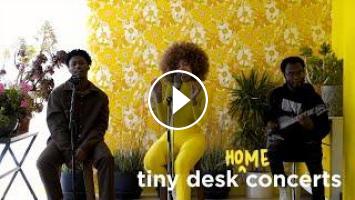