Director Pier Luigi Pizzi drew inspiration from Georges Rodenbach's short novel, "Bruges -- La Morte" which narrates the bizarre and sinister experience of a man who, having lost his wife, is mesmerized and hypnotized by the atmosphere of the city of Bruges to the point that he believes to recognize her in a woman met in the streets. He becomes obsessed with the past but despite the two women's amazing likeness, his beloved one is lost forever.
Rodenbach turns the city of Bruges in a sinister and foggy stage where mysterious events take place. The urban spaces and the dead woman are deeply linked, the city itself amplifies death as it mirrors the main character's feelings, his agony, his tireless quest for an impossible love.
Erich W. Korngold was very touched by this novel and composed an opera imbued with romantic and lyrical elements, that enhance the sense of self destruction and doom of the protagonist, describing through music his sudden mood swings.The reference to water is very important as it mirrors the characters' feelings and the strict analogy with Venice.
Venice is the connecting element between this production and last year's Death in Venice by Benjamin Britten.These two titles are deeply linked and form one unique path.
For that opera too Pizzi had used fog and mist on stage as to evoke a sense of ghost silence and desolation. Water and fog are therefore essential ingredients, and always recurring on the stage set. 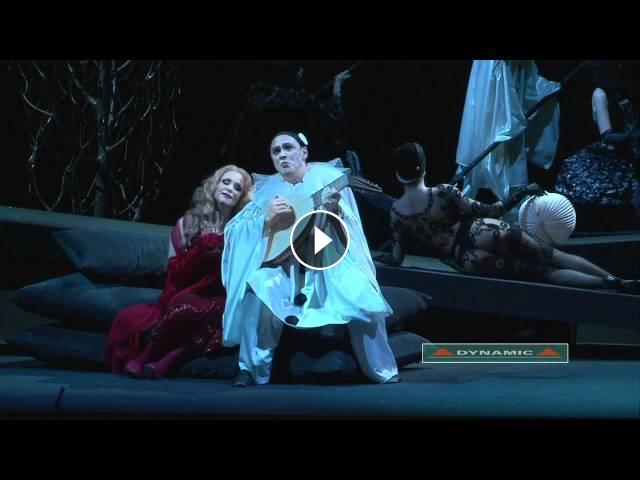