The backdrop for Polo G's Tiny Desk (home) concert is a nod to his deep love for the game of basketball. He and his band perform in Los Angeles Lakers jerseys on an outside court in California, with Polo G repping one of the greatest Lakers, Magic Johnson.

The man born Taurus Bartlett has achieved quite a bit for a relative newcomer in hip-hop. This summer he was selected for XXL's popular Freshman Class cover. His second LP, The Goat, debuted at No. 2 on Billboard's Hot 200 and spawned two platinum-certified singles, including the braggadocious "Flex" that kicks off his Tiny Desk.

Polo G's eyes are hidden behind his hair for the majority of his performance, but as he sings "I'm so sick of farewells and RIPs" on his latest single, "Epidemic," it becomes clear that this 21-year-old Chicago emcee is going through a lot. I found it refreshing to hear a rapper normally backed by beats bare his "heart and soul" with a live band. 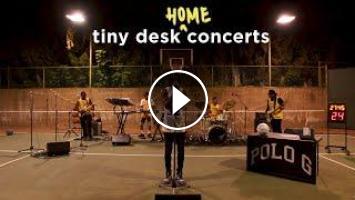