Bob Boilen | June 30, 2020
This week we'll publish four Tiny Desk (home) concerts from around the world. We begin in South Korea, where Tiny Desk Concerts are quite popular. In fact, I invited the Korean band SsingSsing to perform in 2017 and that Tiny Desk concert has been viewed more than 5 million times.

Today, I bring you the music of Coreyah. According to the band, the name represents "inheritance," and that's evident in the way this six-piece presents old or traditional Korean music with a modern twist. It's an uninhibited vision of Korean traditional music with some psychedelic rock, Balkan gypsy, even sounds from South America and Africa. You'll see and hear instruments including the daegeum, a large bamboo flute and geomungo, a large Korean zither that lays on the floor.

When translated into Hangul, the Korean alphabet, Coreyah means "whale," which is the group's good luck charm. The music was recorded in the band's music studio in Seoul, with COVID-19 shutting down most of the country. Strict social distancing is still ongoing in South Korea, though they are streaming their concerts to fans.

And just a note from the band: The geomungo player in this video is Park Dawool, as Coreyah member Na Sunjin was forced to miss this recording due to a personal emergency. 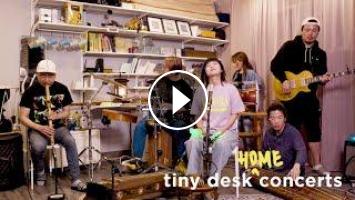