Bobby Carter | April 26, 2021
When D.R.A.M. played the Tiny Desk back in 2017, he made a couple of things clear to us: His playfully dynamic personality was primed for the spotlight, and beneath the catchy hooks, there's a real singer waiting to come out. For his Tiny Desk (home) concert, he does a complete 180. "It's like a new beginning. Full circle. So this time, call me Shelley." he says, following the opening track, "Exposure." Everything is new. Silk pajamas and slippers replace the trench coat and plush beanie, and thanks to lifestyle changes, he's slimmed down quite a bit and goes by his government name now: Shelley.

The shift from lighthearted melodic hip-hop to full-on R&B crooner shouldn't come as a surprise to anyone who's seen him perform live. It feels like it's his way of saying, "Now that I have your attention, allow me to introduce myself." We still get glimpses of the "Big Baby" here and there — the charm, a little bit of silliness, and the million-dollar grin — but other than that, it's grown folks business and vocally flawless performance. For the Shelley Show, he gathers a groovy band in front of a massive bookshelf and runs through selections, including the premiere of "Rich & Famous" from his upcoming self-titled project, due out on April 29, his late mother's birthday. If D.R.A.M. was the ploy to break into the music industry, then Shelley is the longevity play. 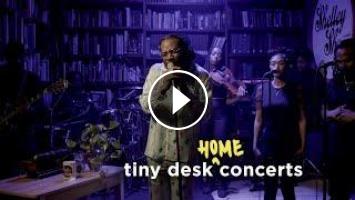