AVA
Tiny Desk Meets AFROPUNK was the opening event of AFROPUNK's "Black Spring" festival. The virtual celebration, hosted by Jorge "Gitoo" Wright, highlighted outstanding talent in Afro-Latin and Afro-Caribbean music across the globe. Our showcase featured four artists who honored their homes and celebrated the art their heritage has inspired.

LaTesha Harris | May 2, 2021
"I feel that we are living in a crazy moment in a crazy time and music has been a safe place for me — the only safe place for me," Luedji Luna says in a low, alluring voice as she explains the purpose of her latest album, Bom Mesmo É Estar Debaixo D'Água. The album, much like the Brazillian singer-songwriters's Tiny Desk performance, is a respite from these times. Elements of jazz and blues are infused with African rhythms as Luna uses music to express her ongoing struggles for autonomy as a Black woman. She performs from her coastal hometown of Bahia in the city of Salvador, Brazil, where African culture flows in abundance. Luna is a powerhouse, entrancing and elegant, soulful and spiritual, as she uses her platform to discuss individual and systemic forms of anti-Blackness. 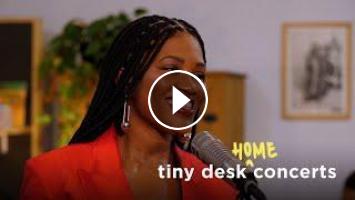