AVA
Tiny Desk Meets AFROPUNK was the opening event of AFROPUNK's "Black Spring" festival. The virtual celebration, hosted by Jorge "Gitoo" Wright, highlighted outstanding talent in Afro-Latin and Afro-Caribbean music across the globe. Our showcase featured four artists who honored their homes and celebrated the art their heritage has inspired.

LaTesha Harris | May 1, 2021
With warm maroon box braids nearly sweeping the floor and glitter adorning her eyes, NENNY's presence demands full attention before she even opens her mouth. Dressed in a flowy, all-white outfit accented with a pastel checker pattern and surrounded by a matching four-piece band, the 18-year-old Portuguese singer-songwriter and rapper appears otherworldly, almost heavenly, as she harmonizes with her backing electric guitar and jumps across the room, dancing with her entire body. NENNY first appeared on heads' radar in 2019 with her single "Sushi." She's continued to impress with several more singles and the release of her debut project, 2020's Aura. 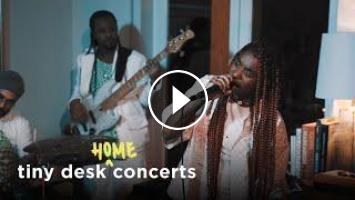