admin
Dec. 4, 2017 | Daoud Tyler-Ameen -- The Ted Leo who showed up to perform at our office this fall was no stranger to NPR Music; in fact, he'd stood on that very spot a few years earlier, trading verses with Aimee Mann in their collaborative project The Both. But he did seem like a changed man.
In the seven years since his last solo album, Leo had been steadily reevaluating his relationship with performance, the business of music and even his own voice. Over the applause that followed his opening number, the bone-rattling slow burn "Moon Out of Phase," he smiled and explained the song was perhaps "a little heavy for noon — but, practically speaking, it helps me get the cobwebs out."
How you listen to Leo depends on when his work came into your life. If you're a back-in-the-day type you might rep for Chisel, his '90s punk outfit born on the Notre Dame campus and bred in Washington, D.C. If you're just tuning in, you may have witnessed his understated comedy chops in arenas like The Best Show on WFMU and a highly enjoyable Twitter feed. At the center of this bell curve are those who found Leo at the dawn of the 2000s — when, at the helm of what's most commonly called Ted Leo and the Pharmacists (shout-out to the typographical variants still mucking up iTunes libraries), he kicked off a run of five stellar albums in just under 10 years, each one urgently attuned to its political context and yet defiant in its ideas of what punk could sound like and whose stories it could aim to tell. Fans will tell you the songs about eating disorders and missing old ska bands felt just as vital to their moment as those that explicitly took on Sept. 11 and the Iraq War.
Leo's latest, The Hanged Man, is different: Recorded at home in fits and starts, with Leo playing most of the instruments himself, the album comprises years of reflection, his gaze fixed more often on his own life than on the headlines. But what was evident in his performance here, which included two new songs and one gem from his classic period, was an enduring knack for turning internal anxiety into kinetic energy, no matter the subject. By the time he hit the first chorus of "Can't Go Back," a danceable bop about accepting that the life you have isn't quite the one you planned for, any remaining cobwebs had been scattered to the wind.
Set List
"Moon Out of Phase"
"Can't Go Back"
"I'm A Ghost"
MUSICIANS
Ted Leo (vocals, guitar)
CREDITS
Producers: Daoud Tyler-Ameen, Morgan Noelle Smith; Creative Director: Bob Boilen; Audio Engineer: Josh Rogosin; Videographers: Morgan Noelle Smith, Alyse Young; Editor: Bronson Arcuri; Production Assistant: Salvatore Maicki; Photo: Claire Harbage/NPR
For more Tiny Desk concerts, subscribe to our podcast. 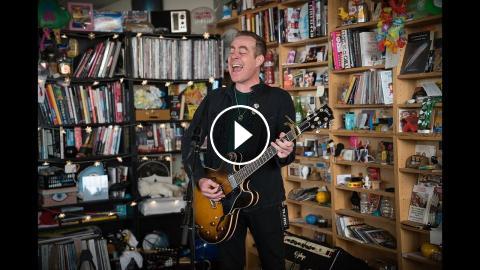