admin
Stephen Thompson | August 14, 2017 -- The moment you get a look at ALA.NI behind the Tiny Desk, you'll notice it in the foreground: The singer asked us to record her set using her vintage RCA Ribbon microphone, which she carries around in a small briefcase between shows. It's a security blanket, a bit of visual branding, a statement of stylistic intent — and, not for nothing, a big reason ALA.NI's voice carries with such warmth and intimacy.
The microphone isn't the only element of ALA.NI's sound that seems to have been transported from another era. The London-born, Paris-based singer draws inspiration from her uncle, a British '20s and '30s cabaret star by the name of Leslie "Hutch" Hutchinson, and writes her own songs in the style of the standards he sang. You & I, her debut album, reverberates from the same spirit: It captures and conveys a reverent love of early-20th-century music, while injecting those sounds with charisma and charm well suited for any era. Here, she performs four songs from You & I, before closing her set with a heartwarming, crowd-aided "Happy Birthday" to her accompanist, Marvin Dolly.
You & I is available now.
iTunes:
Amazon:
SET LIST
"Cherry Blossom"
"Ol Fashioned Kiss"
"Suddenly"
"Happy Birthday (To Marvin)"
MUSICIANS
ALA.NI (vocals, guitar); Marvin Dolly (guitar)
CREDITS
Producers: Bob Boilen, Niki Walker, Bronson Arcuri; Audio Engineer: Josh Rogosin; Videographers: Niki Walker, Tsering Bista; PA: Karen Gwee; Photo: Liam James Doyle/NPR.
For more Tiny Desk concerts, subscribe to our podcast: 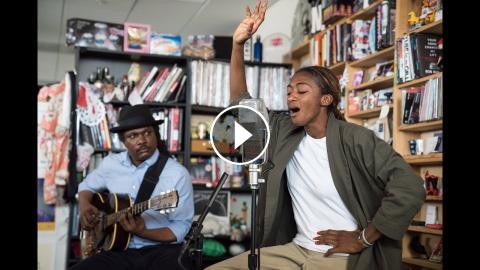 Stephen Thompson | August 14, 2017 -- The moment you get a look at ALA.NI behind the Tiny Desk, you'll notice it in the foreground: The singer asked u...