admin
Bobby Carter | January 23, 2017 — BADBADNOTGOOD made a name for itself by reworking songs from the likes of Nas and Ol' Dirty Bastard, eventually catching the attention of Odd Future leader Tyler, the Creator. The masses took notice in 2015 when the group produced an entire LP for Ghostface Killah, Sour Soul. BADBADNOTGOOD has been called a hip-hop ensemble, but its foundation is clearly jazz, which provides a gateway to countless genres. On IV, the group allows that gateway to widen, adding soul and funk to the repertoire.
Still only in their 20s, the band's members never seemed intimidated by the intimate nature of the Tiny Desk; if anything, it accentuated their enthusiasm. This was their zone. They played three selections from IV — including "Cashmere," which only slightly veered from the studio version, and "In Your Eyes," which features Charlotte Day Wilson's vocals. The tight arrangement allowed Wilson to hover gently above the instrumentation, showing off the band's most promising work to date. It was a pleasure to have BADBADNOTGOOD at the desk for IV — and exciting to imagine what's in store for V, VI and beyond.
IV is available now:
iTunes:
Amazon:
SET LIST
"And That, Too."
"In Your Eyes" (Feat. Charlotte Day Wilson)
"Cashmere"
MUSICIANS
Alexander Sowinski (drums); Chester Hansen (bass); Leland Whitty (sax, flute, guitar); James Hill (piano); Charlotte Day Wilson (vocals).
CREDITS
Producers: Bobby Carter, Niki Walker; Audio Engineer: Josh Rogosin; Videographers: Niki Walker, Colin Marshall, Kara Frame; Production Assistant: Jenny Gathright; Photo: Claire Harbage/NPR.
For more Tiny Desk concerts, subscribe to our podcast: 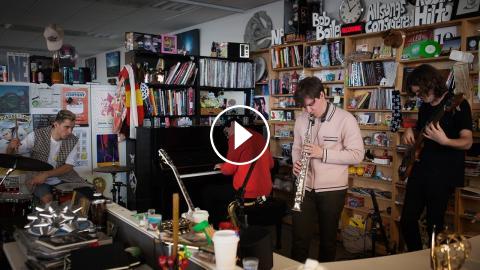 Bobby Carter | January 23, 2017 — BADBADNOTGOOD made a name for itself by reworking songs from the likes of Nas and Ol' Dirty Bastard, eventually catc...