Bob Boilen | January 25, 2021
It's been 10 years since the band Future Islands performed its first Tiny Desk concert. Now its four members are gathered not too far from their Baltimore base in Carroll Baldwin Memorial Hall, sans desk. "We lost the desk," singer Sam Herring tells us with a smile. With drummer Michael Lowry on the tiny stage, the rest of the band — including bassist William Cashion and Gerrit Welmers on electronics — took to the floor, allowing Sam Herring to make his moves and sing his heart out. This music is clearly for the head and the feet.

The songs are from their sixth and very recent album, As Long As You Are. Along with themes of loneliness and love, we also hear songs about race, which is most evident in "The Painter," a song about how we can all look at the same thing and see it so differently. We end with a song that came out shortly after visiting NPR in 2011 called "Balance." It's one of those tunes that feels repurposed for the 2020s: "This is a song for anybody who's struggling through their lives," Sam Herring says, "and I know there are a lot of you all out there, just trying to get by, but it's going to take a little bit more time." 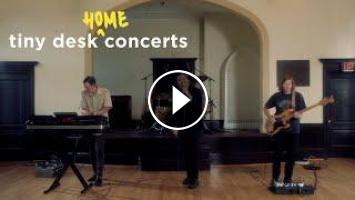