admin
Watch Rhiannon Giddens play "Ten Thousand Voices", "At the Purchaser's Option", "I'm On My Way" and "He Will See You Through" at the Tiny Desk.
More from NPR Music:
Tiny Desk Concerts:
Twitter:
Instagram:
Sept. 16, 2019 | Bob Boilen -- There is an intensity to Rhiannon Giddens I could feel from the moment she arrived at the Tiny Desk, and her songs reflect that spirit. "Ten Thousand Voices," the first song in the set, was inspired by Rhiannon reading about the sub-Saharan slave trade. The follow-up piece was inspired by the American slave trade and a New England newspaper ad in the late 1700s of a young woman "for sale" and her 9-month old baby who was "at the purchaser's option." Rhiannon Giddens' thoughts of this young woman and how her life and her child were not under her control prompted the song "At the Purchaser's Option."
Despite its weightiness, Rhiannon Giddens' music is entertaining, and her voice, the melodies, and her accompaniment are engaging. But it is music infused with lessons and deep purpose — something all too rare in popular music in my opinion.
Three of the songs performed at the Tiny Desk are from her recent release, There Is No Other, recorded with her musical partner Francesco Turrisi. Francesco plays banjo, piano and frame drum here and is joined by Jason Sypher on upright bass. Rhiannon picks up a replica of an 1858 banjo for "I'm On My Way," which she says helps her access her ancestors. "So much beauty and so much horribleness wrapped up together seems to be our story," she says.
For her closing number, she focuses on the beauty. "You can call it whatever you want, 'gravity,' 'God,' whatever. There's a force that I believe in, and that's what I focus on." And with that the band takes us out on the beautiful gospel tune, "He Will See You Through."
SET LIST
"Ten Thousand Voices"
"At the Purchaser's Option"
"I'm On My Way"
"He Will See You Through"
MUSICIANS
Rhiannon Giddens: vocals, banjo; Francesco Turrisi: banjo, piano, frame drum; Jason Sypher; upright bass
CREDITS
Producers: Bob Boilen, Morgan Noelle Smith; Creative Director: Bob Boilen; Audio Engineers: Josh Rogosin, James Willetts; Videographers: Morgan Noelle Smith, Jeremiah Rhodes, Beck Harlan; Associate Producer: Bobby Carter; Production Assistant: Paul Georgoulis; Executive Producer: Lauren Onkey; VP, Programming: Anya Grundmann; Photo: Claire Harbage/NPR 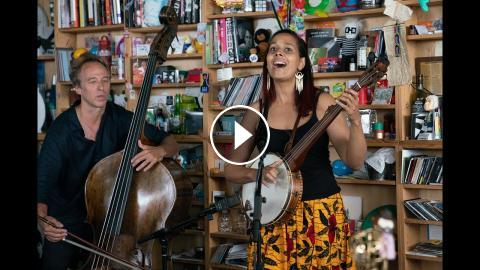 Watch Rhiannon Giddens play "Ten Thousand Voices", "At the Purchaser's Option", "I'm On My Way" and "He Will See Yo...