admin
April 15, 2016 by BOB BOILEN • Seratones singer-guitarist A.J. Hines takes gospel into the garage, and what comes out is fiery rock 'n' roll. The Shreveport, La., band is a joy to see and hear, and this Tiny Desk concert provides a fiery peek at what you'll soon hear on the group's debut album, Get Gone.
Hines grew up singing in the Brownsville Baptist Church, learning to sing out to and hit that back wall without a microphone. At the same time, bassist Adam Davis heard a lot of American rock's greatest guitarist, Jimi Hendrix, as well as the amazing voice of Janis Joplin. The rest of the band is rounded out by the drumming of Jesse Gabriel, who is spare but there with a sharp backbeat, while guitarist Connor Davis rocks with lyrical grit. Seratones won my heart when the group opened for Alabama's St. Paul and the Broken Bones back in December; now, it's getting ready to release Get Gone, due out May 6.
Get Gone is available for pre-order now.
iTunes:
Amazon:
Set List:
"Don't Need It"
"Get Gone"
"Chandelier"
Credits:
Producers: Bob Boilen, Niki Walker; Audio Engineers: Josh Rogosin; Videographers: Niki Walker, Kara Frame; Production Assistant: Jackson Sinnenberg; Photo: Brandon Chew/NPR.
For more Tiny Desk concerts, subscribe to our podcast: 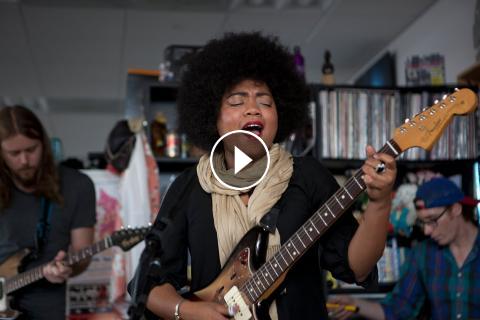 April 15, 2016 by BOB BOILEN • Seratones singer-guitarist A.J. Hines takes gospel into the garage, and what comes out is fiery rock 'n' roll. The Shre...