March 4, 2020 | Suraya Mohamed -- "I hope that you can enjoy this music because it can be heavy," drummer and bandleader Terri Lyne Carrington told the NPR crowd gathered for this Tiny Desk. "We've tried to figure out a way to make it feel good and still give these messages."

In the jazz world, Carrington is a celebrity — a 40-year professional musician who's won Grammy awards and performed with a seemingly infinite list of jazz dignitaries such as Wayne Shorter, Herbie Hancock and Geri Allen. An outspoken activist, teacher and mentor, she is also the founder and artistic director of the Berklee Institute of Jazz and Gender Justice, a multidisciplinary program whose motto is "Jazz Without Patriarchy."

Carrington visited the Desk with her current band, Social Science, a collaboration with pianist Aaron Parks and guitarist Matthew Stevens (both performing here). In the works for some time, their project culminated in 2016 when the cultural divisiveness brought on by the presidential election inspired the trio to take action. "I think there's an awakening happening in society in general," Carrington writes on her website, "I feel a calling in my life to merge my artistry with any form of activism that I'm able to engage in."

The third tune, "Bells (Ring Loudly)," written by Parks and Carrington, features actor Malcolm Jamal Warner who also wrote the spoken word. Carrington had just seen the Philando Castile shooting and her powerful lyrics imagined what she would say to the offending police officer.

"You took my love away from me.
I wanna know how did it feel to watch him tremble and bleed.
Tell me what gives you the right to kill so senselessly?
And when you're alone do you ever think of him or pray for his peace?"

"There is so much we can be angry about but you can't really stay there," Carrington told NPR. "Instead, you can reach somebody on a human level." 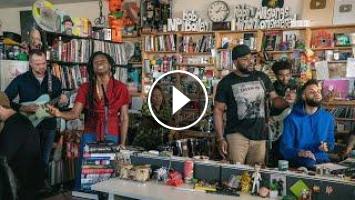 Watch Terri Lyne Carrington + Social Science play at the Tiny Desk. Did you know you can watch new Tiny Desk concerts on npr.org ONE WEEK before they ...