Bob Boilen | July 21, 2020
One of my top albums in 2017 was Silence, from Tom Adams – that transfixing falsetto set against minimalist piano was a balm. I imagined his Tiny Desk (home) concert to be Tom and his piano; what we have is Tom Adams at his home in Cornwall, England, playing four brand-new songs with minimal electric guitar and an enthralling mix of tech-altered sounds. That box with all the wires in the foreground is a Eurorack modular synthesizer which, in real time, processes his majestic voice in ways unpredictable even to Tom. He wrote to tell me that, "Once the system is set in motion, you never know exactly what will happen next... I like to think of it as being a bit like the waves on the beach; to some extent, they are all predictable, yet each wave is still unique." It's a lovely way to describe this new music from this singular talent. 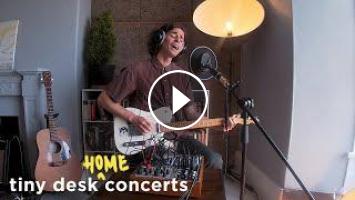