admin
Watch Elisapieh play "Arnaq", "Una" and "Darkness Bring The Light" at the Tiny Desk.
Did you know you can watch new Tiny Desk Concerts on npr.org ONE WEEK before they go up on YouTube? Click here:
Follow NPR Music:
Twitter:
Instagram:
Feb. 21, 2020 | Bob Boilen -- Watching Elisapie perform, her intensity is undeniable. I feel it in her gaze, in her deep, soulful bellow. Elisapie is a Canadian singer and songwriter born in Salluit, on the northern tip of Quebec. Her lyrics, most often sung in her native Inuktitut as well as English and French, touch on her life as an adopted child and on meeting her biological mother. Now, as a mother herself, she sings about what it must have meant to her own mother to give up her child. Elisapie left her birth-village, Salluit, as a teenager and headed to Montreal, leaving her community and her sick mom. The songs she sings, here all come from her album, The Ballad of the Runaway Girl and deal with the consequences of her leaving.
The sounds in Elisapie's music have roots in older rock music — in fact, she was a vinyl-spinning DJ and found a connection with the music of Neil Young and Bob Dylan, musicians with a message. Her band is also outstanding, from the bass saxophone of Jason Sharp to the guitars and sounds of Joe Grass and Josh Toal. And take some time to watch and listen to the tasteful drumming of Evan Tighe. This is an extraordinary Tiny Desk from an artist with something meaningful to say.
SET LIST
"Arnaq"
"Una"
"Darkness Bring The Light"
MUSICIANS
Elisapie: vocals, Joe Grass: guitar; Josh Toal: bass; Evan Tighe: drums; Jason Sharp: saxophone
CREDITS
Producers: Bob Boilen, Morgan Noelle Smith, Jack Corbett; Creative director: Bob Boilen; Audio engineer: Josh Rogosin; Editor: Jack Corbett; Videographers: Jack Corbett, CJ Riculan, Maia Stern; Associate Producer: Bobby Carter; Executive producer: Lauren Onkey; VP, programming: Anya Grundmann; Photo: Mhari Shaw/NPR 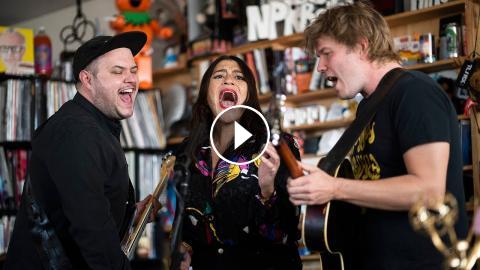 Watch Elisapieh play "Arnaq", "Una" and "Darkness Bring The Light" at the Tiny Desk.Did you know you can watch new Tiny ...