admin
June 18, 2018 | Sidney Madden -- Before Khalid performed "Location," his debut single that's now four-times platinum, at the Tiny Desk, he told the audience the story of how he wrote the track during his senior year of high school not knowing where music would take him. (FYI: He graduated in the Class of 2016. Feel old yet?) And before singing "Saved," Khalid explained that this was one of the first songs he ever wrote and remembers that when he put it up on SoundCloud, a rude commenter tried to diminish his talent. Obviously, he didn't let the negative energy stop him.
"I honestly couldn't tell you what that guy is doing with his life but he's not doing this," Khalid said with a contagious laugh.
Khalid's music narrates life's awkwardly necessary moments: the butterflies of young love, the angst of craving freedom, the apprehension of teetering on that next step in life. He creates honest, comforting pop for teens and young adults that speaks to the kid in all of us. Accompanied only by acoustic guitarist Jef Villaluna, the 20-year-old sensation captured this fleeting fearlessness of youth and brought it to the Tiny Desk for a heartfelt serenade session. The way his voice glided calmly over the guitar notes, switching between baritone and tenor, was fitting given that he sings about teenage peaks and pitfalls. Khalid's sense of wide-eyed yet humble wonder permeates through the entire set.
Khalid finished his set with a mini bow and a peace sign to the audience, but made sure to squeeze in time for some of the diehard fans in the crowd of NPR employees and their guests — many of whom were gleeful teens, some just as awkward, angsty and wide-eyed as he when penning his first songs in high school. He understood.
Set List
"Young Dumb & Broke"
"Location"
"Saved"
CREDITS
Producers: Bob Boilen, Morgan Noelle Smith; Creative Director: Bob Boilen; Audio Engineer: Josh Rogosin; Videographers: Morgan Noelle Smith, Beck Harlan, Khun Minn Ohn; Production Assistant: Catherine Zhang; Photo: Eslah Attar/NPR. 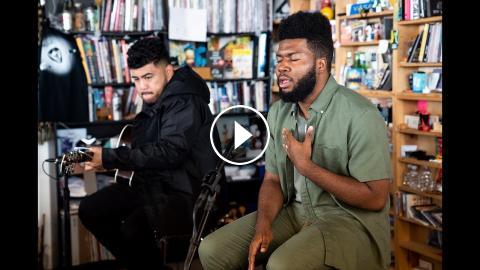