March 3, 2020 | Bob Boilen -- We've never had an original Mellotron at the Tiny Desk until now. Much like a Hammond organ, it's big, heavy and fragile. When they fired it up, with all its mechanical gears turning tape loops and moving play heads, the 15-year-old geek in me blissed out.a

The Mellotron was a magical 1960s invention that predates sampling. It's a keyboard instrument, with each piano key triggering a tape loop — the sound could be a string ensemble, a flamenco guitar, a saxophone and so much more. Think about the flute sounds on The Beatles' song "Strawberry Fields Forever" and you get the idea.

When Mellotron Variations keyboardist Robby Grant and I began discussing an all-Mellotron Tiny Desk, we quickly realized that having four of these beasts wouldn't fit behind my desk. So Robby Grant, Pat Sansone (Wilco) and Jonathan Kirkscey performed on the portable — and still incredible-sounding — 21st-century version of the instrument. At the same time, John Medeski (Medeski, Martin & Wood) tackled the original beast.

The sonic landscape they produce as Mellotron Variations is ingenious and impressive. It's a score with the audience as collective filmmaker, each one of us capable of creating imagery in our heads to this music of mystery and sometimes comedy. In the words of my teenaged self, "it was a trip." 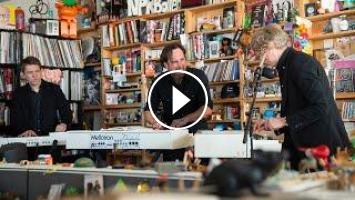 Watch Mellotron Variations play "Agent Cha Cha", "Dulcimer Bill" and "Pulsar" at the Tiny Desk. Did you know you can wat...