admin
March 4, 2019 | Bobby Carter -- "I wish I could've savored that moment longer," Phony Ppl lead singer Elbee Thrie said to me as we rode the elevator down, following the band's Tiny Desk performance. "I'll never forget this."
Throughout the set, you see Thrie scan the entire office, taking mental inventory of the entire experience. Phony Ppl is a group that emits a vigorous energy on and off stage. In this case, the spirit was exchanged between the band and the NPR staff from the moment they gathered behind the desk and gave a zesty greeting.
The Brooklynites formed in high school and stand out as one of a handful of R&B bands in the industry that makes eclectic choices in fashion and lyrical narratives. Their fifth full-length, 2015's Yesterday's Tomorrow, was praised for the way the band seamlessly melds jazz, R&B and hip-hop. After consecutive residencies at the Blue Note jazz club in New York City — and a tour with rapper Pusha T — Phony Ppl arrived at the Tiny Desk more refined than ever. They entered the building like they were shot out of cannon, with guitarist Elijah Rawk spending a hefty chunk of his prep time twisting his hair. Right before the cameras started rolling we unsuccessfully scrambled to hide their bag of shea butter. If you look closely, you'll spot it sticking out next to our turntable.
Donning a black turtleneck and sweaters, they invited returning guest Braxton Cook on saxophone to play their four-song set. They opened with "Compromise," a highlight from Yesterday's Tomorrow, and locked into an up-tempo pocket as if it was a second skin. From there, they wove in three more songs, including two from their latest project, mō'zā-ik.
Set List
"Compromise"
"One Man Band"
"Cookie Crumble"
"Why iii Love the Moon"
Musicians
Elbee Thrie: lead vocals; Elijah Rawk: guitar; Maffyuu: drums; Aja Grant: keys; Bari Bass: bass; Braxton Cook: saxophone
Credits
Producers: Bobby Carter, Morgan Noelle Smith; Creative Director: Bob Boilen; Audio Engineers: Josh Rogosin; Videographers: Morgan Noelle Smith, Kaylee Domzalski, Kimani Oletu; Editor: Kimani Oletu 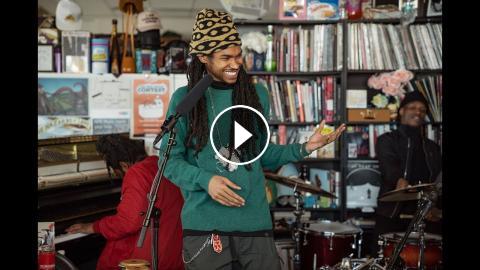