admin
Sept. 21, 2017 | Bob Boilen -- One look at (and listen to) the cross-dressing, Asian rock band SsingSsing and you would hardly think they're singing music inspired by traditional Korean folk. But SsingSsing isn't like any other band I've ever seen or heard.
The group sings a regional folk style called minyo and the gender bending look has to do with shamans not glamour. As singer Hee-moon Lee describes it, "In Korean traditional art, male shamans, called baksu, have the body of a male. But as mediums, they need more than a single sexual identity, because they're channeling both male and female spirits. When I act a female character and sing, I have to overcome the fact of my being a male sorikkun (singer), and try my utmost to bring a more neutral, unisex feeling to the performance. It sounds silly, but I feel like going back to the sensibilities of my youth, when I liked Madonna, helps."
The understated music, the small dramatic gestures and the costumes all combine for one of my most memorable Tiny Desk Concerts of all time.
Set List
"Minyo Medley"
"Nanbongga (Song of Beloveds)"
"Saseol Nanbongga (Narrative Song of Beloveds)"
MUSICIANS
Hee-moon Lee (vocal), Da-hye Choo (vocal), Seung-tae Shin (vocal), Young-gyu Jang (bass guitar), Tae-won Lee (electric guitar), and Chul-hee Lee (drums)
CREDITS
Producers: Bob Boilen, Bronson Arcuri, Morgan Noelle Smith; Audio Engineer: Josh Rogosin; Videographers: Beck Harlan, Kara Frame, Bronson Arcuri; Production Assistant: CJ Riculan; Photo: Claire Harbage/NPR.
For more Tiny Desk concerts, subscribe to our podcast: 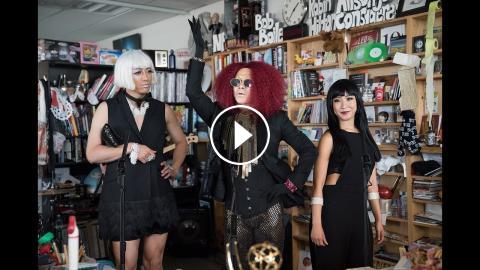 Sept. 21, 2017 | Bob Boilen -- One look at (and listen to) the cross-dressing, Asian rock band SsingSsing and you would hardly think they're singing m...