AVA
We've been filming Tiny Desk concerts for more than 10 years. While revisiting our archives, we discovered that some of our earliest concerts never made it to YouTube!
Watch Gabriel Kahane’s Tiny Desk concert from 2011: https://www.npr.org/2011/11/26/142514755/gabriel-kahane-tiny-desk-concert

Tom Huizenga | November 26, 2011
Gabriel Kahane seems to enjoy blurring the lines between indie rock and indie classical. He arrived at the NPR Music offices with a string quartet and an electric guitarist in tow, and though they hadn't played together for long, you'd never know it. That says something about these musicians (one of whom, the violist Caleb Burhans, is a terrific young composer), because Kahane's songs are rigorously crafted — some with the insight and wit of Schubert lieder, but telling decidedly more contemporary stories.

The tongue-in-cheek "Charming Disease," for example, is a bleak portrait of a struggling alcoholic ("You were on the floor when I got home / Scraped you up, cleaned you off, got you out the door") with a catchy hook. But with its see-sawing, minimalist piano chords, shifting harmonies and unexpected melodic curves, it feels right to call it a composition.

The classical music thing comes naturally to Kahane. His father, Jeffrey Kahane, is a celebrated concert pianist and music director of the Los Angeles Chamber Orchestra. Kahane, like his dad, plays piano, but also guitar — and he sings with a voice that's lithe and expressive. He writes chamber music, lighthearted pop songs and commissions for orchestras like the Los Angeles Philharmonic.

The music Kahane performs here is all from his recent album, Where Are the Arms, a suite of 11 smart songs that weave in, out and between pop, rock and classical, covering a broad range of emotions. The title track is a wistful plea, anchored by delicately repeating guitar arpeggios.

"Last Dance," which closes this Tiny Desk Concert, unreels in three little scenes, like a miniature opera. Kahane sings the recitative-like descriptions of his protagonist's daily routines, and then he pauses to launch a song within the song, a kind of pulsating pop fugue that ends in a satisfying cadence.

SET LIST
"Charming Disease"
"Where Are The Arms"
"Last Dance" 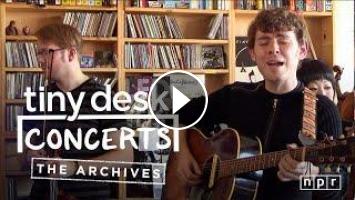