AVA
We've been filming Tiny Desk concerts for more than 10 years. While revisiting our archives, we discovered that some of our earliest concerts never made it to YouTube!
Watch Abaji’s Tiny Desk concert from 2010: https://www.npr.org/2010/02/15/123533606/abaji-tiny-desk-concert

Not many of us were familiar with Abaji before he came to play this Tiny Desk Concert. But after he left, we all knew a bit more about music from half a world away, and a lot more about a big-hearted musician with a quick wit and a passion for instruments.

Abaji's work spans many cultures and languages. With roots in Greece, Turkey, Armenia and France, he's at home strumming a twangy bouzouki, blowing into a breathy duduk or bowing a soft-toned kamancheh. When recording his latest album, Origine Orients, he played 10 different instruments, many of them simultaneously, with no second takes or overdubs. It took him just two days.

Abaji begins with a song from the album, "Min Jouwwa" ("From Inside"), accompanying himself on an invention of his own, a tricked-out Western-style guitar with extra strings, giving it the sound of an Egyptian oud. He follows it with "Summertime," with its haunting, serpentine riffs on the bouzouki and verses alternating between Arabic and English. Scatting in Arabic never sounded so natural.

After the cameras shut down, Abaji hung around for a while to rummage through his menagerie of instruments, showing us — and demonstrating — a large duduk (an Armenian cousin of the oboe), an Indonesian suling (flute) and a Colombian saxophone (of sorts) made from bamboo that looked more like a snake. It was something like getting a lesson in world music from a good friend. 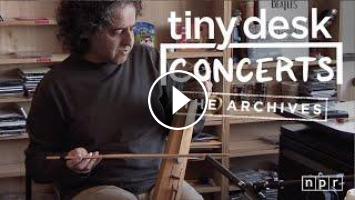