AVA
We've been filming Tiny Desk concerts for more than 10 years. While revisiting our archives, we discovered that some of our earliest concerts never made it to YouTube!
Watch Jimmy Cliff’s Tiny Desk concert from 2010: https://www.npr.org/2010/07/12/128383652/jimmy-cliff-tiny-desk-concert

Bob Boilen | July 12, 2010
Jimmy Cliff is a gentle soul — that's always come through in his songs and in the lilt in his voice. His most legendary songs appeared in the 1972 film The Harder They Come and its soundtrack; start with "Many Rivers to Cross" and you'll feel the heart, soul and wisdom of Jimmy Cliff.

Cliff starred in The Harder They Come as a reggae artist trying to make it in the music business, and the songs he sings — including "You Can Get It If You Really Want," "Sitting in Limbo" (both of which he performs in this Tiny Desk Concert) and "The Harder They Come" — never died. They're part of the soundtrack to a generation, but their reach extends beyond that. The Harder They Come put reggae on the map in the early '70s and became both an antidote and a guiding spirit to the punk and new wave music that would come a few years later.

For a musician, it must be hard to have your career hinge on your early music, but Jimmy Cliff always soldiered on. Still does. And his new songs are often as good as those early ones — he performs one, "I Got to Move On," here. But it is often circumstances, not songwriting abilities, that land a tune in the canon.

Jimmy Cliff was inducted into the Rock and Roll Hall of Fame earlier this year — and was, for many, the star performer there. In myriad ways, his aging voice sounds better than ever, having grown into those songs he wrote and sang nearly four decades ago. I felt honored to be a part of this Tiny Desk Concert, and pleased that we captured it for posterity. 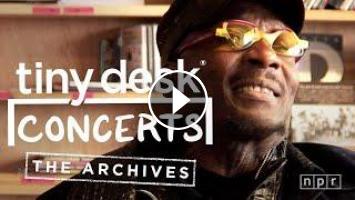