AVA
We've been filming Tiny Desk concerts for more than 10 years. While revisiting our archives, we discovered that some of our earliest concerts never made it to YouTube!
Watch Grouplove’s Tiny Desk concert from 2011: https://www.npr.org/2011/10/11/141135010/grouplove-tiny-desk-concert

Grouplove knows how to write the kind of songs that keep me awake at night, that sing in my head over and over, that have me pounding the steering wheel to the beat, and that are worth rolling down the car windows and sharing with pedestrians whether they want to hear them or not. These aren't the greatest singers or guitarists we've had play in the NPR Music offices — the early-day warmup for the three songs here seemed about the length of a full concert — that craft will strengthen as they play. Grouplove has been together for less than two years, but its knack for pop songwriting is priceless. You can hear it best on the band's debut album, Never Trust a Happy Song.

Singer Hannah Hooper and songwriter, singer and guitarist Christian Zucconi met the other members of Grouplove — Sean Gadd, Ryan Rabin and Andrew Wessen — far from their homes at an artists' retreat on the Isle of Crete. They vowed to work on music together and recorded an EP in the garage of drummer Rabin's parents; Rabin's dad is Trevor Rabin, guitarist for the prog-rock band Yes in the early '80s and '90s.

When it came time to work on Never Trust a Happy Song, Grouplove moved from the garage to Ryan Rabin's apartment, where he did his first major album production. The band is a collaborative unit, and though songs may start with Christian Zucconi, everyone chips in. Judging from the music, there's a lot of fun and sparks flying in those rehearsal sessions.

Grouplove's name is emblematic of its spirit; it's also emblazoned as a tattoo on many of the band members. So, honestly, how could they ever break up? In the meantime, I look forward to hearing Grouplove grow. 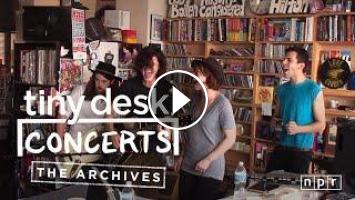