AVA
We've been filming Tiny Desk concerts for more than 10 years. While revisiting our archives, we discovered that some of our earliest concerts never made it to YouTube!
Watch Frazey Ford’s Tiny Desk concert from 2010: https://www.npr.org/2010/08/15/129137755/frazey-ford-tiny-desk-concert

Bob Boilen | August 15, 2010
Ten years ago, I heard an astonishing voice stand out in a group filled with strong singers. The voice belonged to Frazey Ford; the group was The Be Good Tanyas.

The Be Good Tanyas released three outstanding albums — Blue Horse is still a favorite of mine — and then, silence. It's been four years since we've heard Ford's lilting, laid-back sound, but now she's back with a solo record. The album, Obadiah (which also features another Be Good Tanya, Trish Klein) follows Ford's love of rhythm and blues and traditional American country music.

Hear An Interview
Frazey Ford: A Soulful Return With 'Obadiah' Aug. 13, 2010
Ford came to the NPR Music offices for this Tiny Desk Concert — armed with her acoustic guitar and a cheetah jumpsuit — and lulled our office with four beautiful tunes. If you loved The Be Good Tanyas, like me, you'll be thrilled to hear her sing again. And if you've never heard Frazey Ford, you're in for a treat.

Set List:
"Firecracker"
"Lost Together"
"If You Gonna Go"
"The Gospel Song" 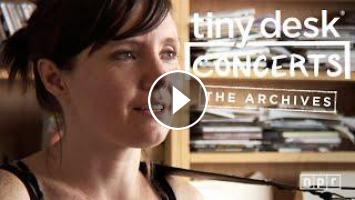