AVA
We've been filming Tiny Desk concerts for more than 10 years. While revisiting our archives, we discovered that some of our earliest concerts never made it to YouTube!
Watch Laura Veirs' Tiny Desk concert from 2010: https://www.npr.org/2010/03/01/124015786/laura-veirs-tiny-desk-concert

If Laura Veirs was in a songwriting rut prior to recording her lovely and spare new album, July Flame, it doesn't show. Perhaps the return to pared-down and simply constructed songs worked to arouse musical inspiration, because the record is among her best. For the most part, the songs on July Flame orbit around Veirs' acoustic-guitar playing and voice. But it's her idiosyncratic lyrics and melodic flourishes that imbue her music with sun-dappled warmth; hers is the sound of immense, wide-open spaces.

All the perfectly chosen instrumentation in the songs' arrangements — the fluttering plucks of strings, the subtle vibrato of a marimba, the stirring backing vocal harmonies, the swooping violins — come courtesy of producer Tucker Martine. There's a noticeable comfort between them; Martine has now worked with Veirs on her last six albums, and he seems to know just how to augment her delicate voice with just the right touches to let her shine.

When a very pregnant Veirs settled in for this performance behind Bob Boilen's desk — a venue that can be a little awkward for many musicians — that same warmth and intimacy shone through. After a slight musical miscue, endearing enough to keep in the final video, Veirs and her small backing band treated the NPR Music offices to a three-song set that introduced us into her musical world. 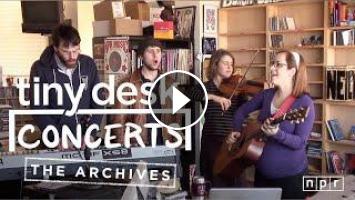