AVA
We've been filming Tiny Desk concerts for more than 10 years. While revisiting our archives, we discovered that some of our earliest concerts never made it to YouTube!
Watch Bettye LaVette’s Tiny Desk concert from 2010: https://www.npr.org/2010/05/21/127043684/bettye-lavette-tiny-desk-concert

We were not prepared for Bettye LaVette's appearance in the NPR Music offices. We thought we were — having set up our cameras and recording gear and signed in all the friends who had heard she was scheduled to play and beaten down our door.

But then she blew into the room and conquered it before she'd sung a single note. She teased Bob Boilen mercilessly and told all the women how beautiful they were. She had reporters and producers doing her bidding all over the building. But after we cleared a spot for her to perch on the corner of Bob's desk, she went to work.

The first song she sang, a cover of Ringo Starr's "It Don't Come Easy," killed the room. LaVette hunched her shoulders, dropped her chin and yanked the song out of her throat. It felt like a confession. Every movement she made — whether she threw her head back in a desperate wail or drooped it to close a phrase signifying defeat — shoved further meaning into the words. Her voice was bruising, shocking, and she sang really loud.

Before she began, LaVette asked us to close the blinds. It was 3 in the afternoon, but she said she was about to sing some night songs. She sang end of the night songs: "It Don't Come Easy," "Don't Let the Sun Go Down on Me," "Nights in White Satin." (Due to licensing issues, only "It Don't Come Easy" is available in the video above, at least for the time being.) But she took those songs — glammed up and kindly lit in the recordings we remember — and tore off their clothes. She wrestled them to the ground. It was a real performance, from which each of us emerged a little sore.

At the end, LaVette's accompanist — Alan Hill, who had trained a gimlet eye on LaVette all the while — registered his approval. "We should play more office parties," he said. 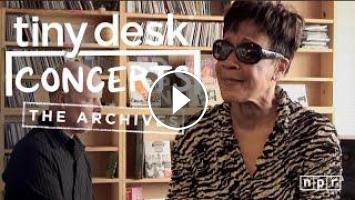