AVA
We've been filming Tiny Desk concerts for more than 10 years. While revisiting our archives, we discovered that some of our earliest concerts never made it to YouTube!
Watch Lionel Loueke’s Tiny Desk concert from 2010: https://www.npr.org/2010/04/26/126159612/lionel-loueke-tiny-desk-concert

Listen to any Lionel Loueke record long enough, and you'll wonder, "How did he make that noise?" The West African-born jazz guitarist has developed an extensive palette of sounds, experimenting with low tunings, fast finger techniques, nylon strings, acoustic and electric axes, even jamming paper in his strings. And he also sings — or, more accurately, vocalizes. The clicks, wet smacks, the singing-along-to-his-solos, even the spasmodic speaking-in-tongues exhortations; he says they just come naturally to him.

Naturally, when Loueke's trio came to Washington, D.C., earlier this year, we asked him to demonstrate his toolkit in a Tiny Desk Concert. The Tiny Desk is a pretty tiny desk, but it still felt a bit unfair to the rest of his band. The group is led by Loueke almost in name only; the drummer and bassist both compose for the group, and their input has shaped Loueke's language, even apart from the trio, for more than 10 years of playing together.

Luckily, the trio arrived at our cramped stage, whereupon drummer Ferenc Nemeth shrugged and declared, "Yeah, I'll play." I asked him whether I could get him a snare drum or cymbal stands or anything, and he waved me off, pulling out bells, bundle sticks and a little rig set up around a hand drum and a jangly tambourine. Game on.

Nemeth and Loueke treated us to impromptu duet versions of "Vi Ma Yon" — a traditional song that appears on Loueke's latest, Mwaliko — and another tune from the group's songbook, "Merci." (Their recording of Wayne Shorter's "Nefertiti," which doesn't appear on this page, will be available on A Blog Supreme this week.) Jammy and exploratory, it felt like jazz with West African accents — or was it West African music with jazz sensibilities? See and hear for yourself. 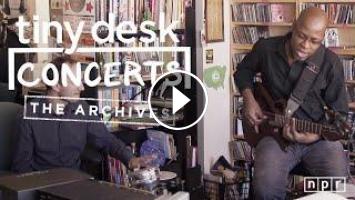