AVA
We've been filming Tiny Desk concerts for more than 10 years. While revisiting our archives, we discovered that some of our earliest concerts never made it to YouTube!
Watch Adam Arcuragi’s Tiny Desk concert from 2010: https://www.npr.org/2010/01/10/122365099/adam-arcuragi-tiny-desk-concert

Four years ago, I dug Adam Arcuragi's CD out a stack of many and was struck by his voice: powerful, but without the unnecessary melodrama that encumbers so many talented singers.

Then there was the poetry. All you have to do is read the title to the first Arcuragi song we put on All Songs Considered, titled "1981 (Or Waving at You As We Part at Light Speed Will Look Like I'm Standing Still)." His recent recording, I Am Become Joy, was just as appropriately titled; an uplifting record whose sorrow is shaken by the sound of old friends shouting at the rafters. (Only, unlike most of my friends, they can sing.)

When Arcuragi came to play at my desk, most of the folks here at NPR hadn't heard him. After hearing the three songs he played, many walked away amazed. I hope you do, too. 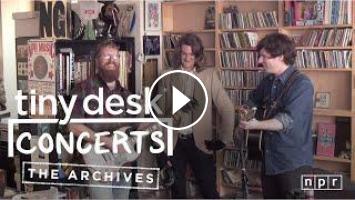