ABOUT THIS EPISODE - "Lyrics On Trial: Mac Phipps (Pt 2)"
"A bullet in your brain." What right does the justice system have to decide whether a rapper's words are imagination or intent to kill? In this continuation of Mac Phipps' story, police pressure witnesses, while prosecutors use the artist's own lyrics to build a murder case against him. And Mac isn't the first: From a century-old folk tune to Ice-T's "Cop Killer," we examine the history of policing Black creativity to reveal a phenomenon that's become common practice in courtrooms — using lyrics as Exhibit A. 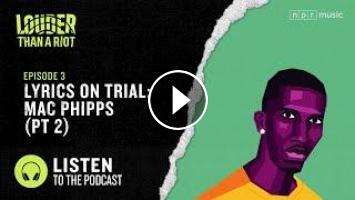 Subscribe on Apple Podcasts: http://apple.co/louderthanariotpodcast ABOUT THIS EPISODE - "Lyrics On Trial: Mac Phipps (Pt 2)" "A bullet...