AVA
We've been filming Tiny Desk concerts for more than 10 years. While revisiting our archives, we discovered that some of our earliest concerts never made it to YouTube!
Watch Sondre Lerche’s Tiny Desk concert from 2009: https://www.npr.org/2009/11/02/114336123/sondre-lerche-tiny-desk-concert

When the makers of the 2007 romantic comedy Dan in Real Life wanted to convey an air of goodhearted whimsy, they turned soundtrack-writing duties over to Norwegian-born singer-songwriter Sondre Lerche. And why wouldn't they? For all his jazz-informed skills on the guitar, Lerche's greatest weapon is his flair for lightness and likeability.

Known as a varsity-level banterer on stage, Lerche puts all those skills to good use in this charming Tiny Desk Concert in the NPR Music offices. Performing three songs from his new album Heartbeat Radio — and introducing the title track with the disclaimer, "It's taking some issue with radio, but it's not about you guys" — he conveys all the lilting sweetness his fans have come to expect. 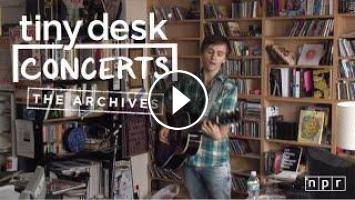