The Low Anthem: NPR Music Tiny Desk From The Archives

AVA
We've been filming Tiny Desk concerts for more than 10 years. While revisiting our archives, we discovered that some of our earliest concerts never made it to YouTube!
Watch The Low Anthem’s Tiny Desk concert from 2010:
https://www.npr.org/2010/01/20/122589471/the-low-anthem-tiny-desk-concert

This past summer in Newport, R.I., I saw The Low Anthem perform as part of the Newport Folk Festival's 50th anniversary. I had heard the band's album Oh My God, Charlie Darwin early that year and found it simple, gorgeous and thought-provoking. It's hard to do what The Low Anthem does so well — play sullen, spacious music — at a noisy and crowded music festival. But it did, and it won over an awful lot of fans in the process.

Later, I was talking to Jay Sweet, who picks much of the talent that comes to Newport these days, and I told him how taken I was by The Low Anthem. Sweet replied, "These guys are from around here. Last year, they were volunteers at the festival, picking up trash."

I love that story, and I love this band's spirit. When The Low Anthem came to NPR Music to play a Tiny Desk Concert, the band seemed humbled and comfortable sitting on and around my desk, playing music as if it were hanging around in someone's living room. So grab something warm to drink, gather 'round, and pay special attention to the cell-phone trick at the end of "This God Damn House" — it's something else.

The Low Anthem: NPR Music Tiny Desk From The Archives 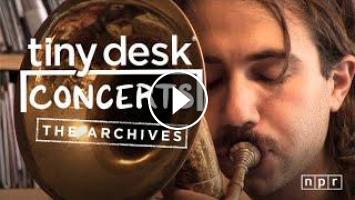